Record Low Inventory Levels- What does this mean to YOU?

Let's address the biggest question that we've received in the last three months is, what's going on with housing inventory, and what does it mean to me when I'm looking to buy a home or sell a home?

Let’s address the biggest question that we’ve received in the last three months is, what’s going on with housing inventory, and what does it mean to me when I’m looking to buy a home or sell a home? So, you’ve seen the headlines. “US inventory drops below one million homes”. What does that mean? Well, it means that there’s very few homes on the market, relative than what we are used to this time of year. In fact, Zillow put out a report that stated that the active listings available are the lowest that they’ve ever been in the history of real estate. That’s a pretty bold assessment of where we are in real estate. The home prices, of course, when inventory drops, go through the roof. So, whenever there’s a demand of any product, the price always goes up.

Here’s how much pricing has gone up with real estate, just in one year, 20%. So, inventory levels at an all time low, by the way, I’ll put a graph below, which will really show you where they’ve been and where they going, and where they are now. Okay. So, if you’re a seller, what do you do about this? Well, assuming you can land on the next home, which is the biggest concern, I think for most folks that are in an existing home, as we’ve spoken with hundreds and thousands of sellers that are looking to make a move, but they don’t want to because they can’t find the next place, is get clear in what you’re looking for. Then, let your agent know that. Now, if you hire the right agent, you’re going to be able to get access to off-market listings, and so what we’re doing a lot of times is matching a seller up with the next property, and it’s something that’s just not even on the market. Okay? 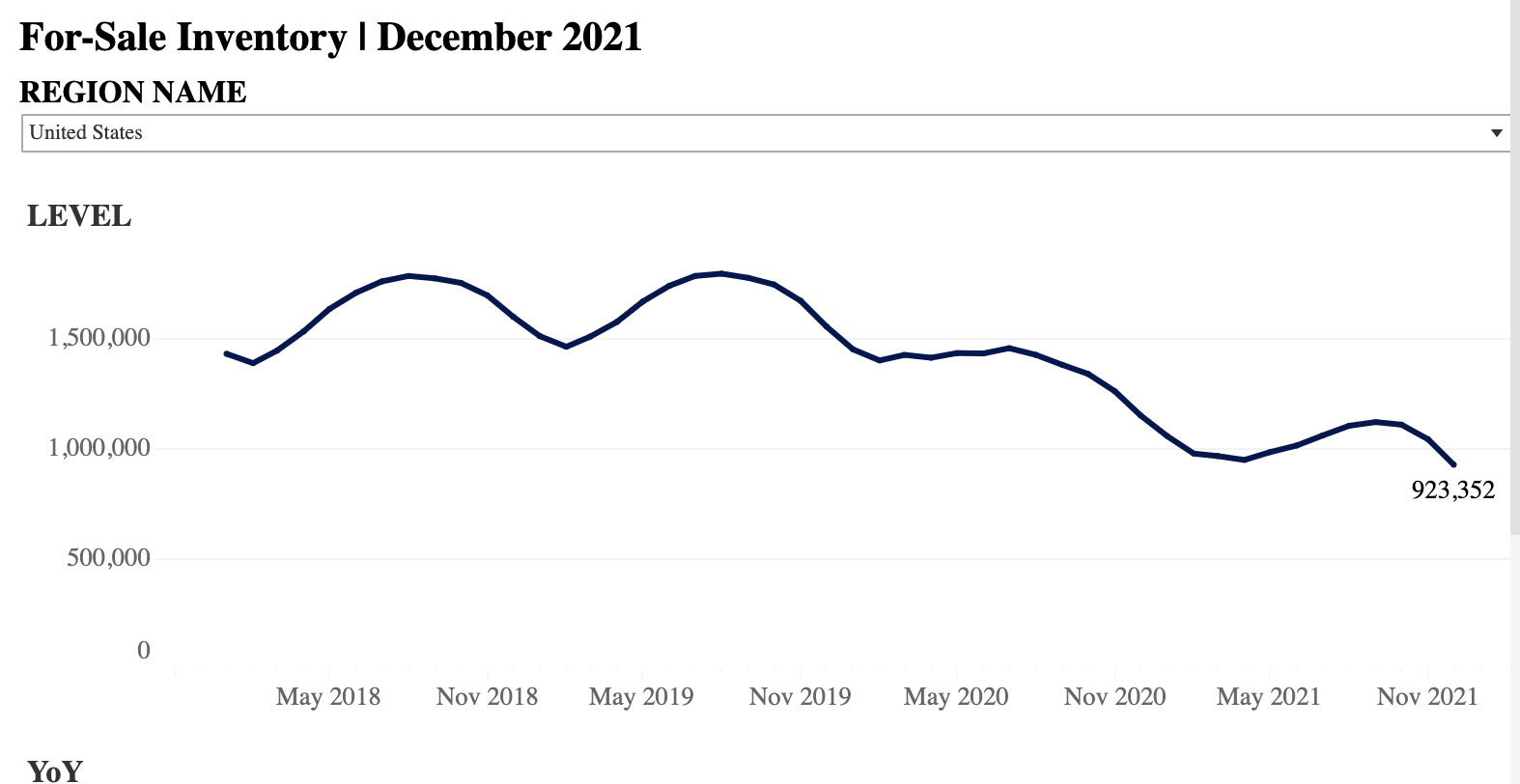 So, we can line you right up and match you up that way. So, off-market listings is a big one. There’s such a thing as reverse contingencies, which means that we can put a clause in the contract, which states that you don’t need to actually, officially enact your contract until you’ve found that next home. Finally, we are working a lot with sellers on getting a lot of possession time after the closing date. We closed on one last week where they were in their home for 75 days after close. So, those are some things to keep in mind, but the plus side of this equation as a home seller, there, with this low inventory being at a record level, that also means that home prices at are at an all-time high.

Now, all of this is all relative to something else, and I want to take you back in time, if I can, to 2010, when we were in an all on free-fall for pricing. Sellers would say to me, “I would love to sell my home, but I cannot.” “Why not?” “Because I’m upside down, under water,” which simply means that an individual, a homeowner owes less … Let me restate that. The homeowner owes more than the property is worth. Okay. So, they have a mortgage balance, and it’s X amount, and the price of the home is here. So, they literally can’t sell if they want to, without bringing money to close. So, that’s a desperate situation. So, we’re so far removed from that. I think a lot of people forget that. So, remember, as a seller, you now have the ability to do it. You have plenty of equity, more than you’ve ever had in your life, likely.

The third thing is now, what do we do about that? How do we win in this market?

The third thing is now, what do we do about that? How do we win in this market? Well, find the next place. Build in enough time for you to navigate from home A to home B, and then get you there. So, just remember that the biggest piece here is that you have the ability to move, whereas so many sellers did not have the ability to do that back, 10 years ago. It’s hard to believe that, but it’s true. Home buyers, if you’re looking to buy in this market, off-market, off- market, off-market. Your agent must have access to homes that are not on the market. Now, we could always face the multiple offer situations like everyone else is, but we found it to be a much better experience for the home buyer, to give them a few more options of homes that are not listed on the market.

They’re sometimes called pocket listings, off-market listings, and we have a list of those homes that we work with our buyers every single day. So, if you’re a seller, look for a home that’s off-market. If you’re a buyer do the same thing, and those are a couple ways that you can win in this market. If you want to know what your home is worth in today’s market, you know you’ve gained some massive equity over the last few years, and you want to know where you really are, even if you’re not selling, give us a call here at Yoder Real Estate. We’ll establish a baseline for you, and we can always update it every six to 12 months. If you’re a buyer that really wants to buy, you just don’t know how to do that, or you’re afraid to enter the marketplace under, it’s understandable.

Just remember too, that the interest rates are poised to increase this year, which means that home prices are going up and then interest rates are also going up. What does that mean for your payment? It’s going up. So, the best thing to do is capitalize on today’s very low interest rates. Capture that low payment, because the interest rate is going to impact your payment more than any other factor, including home pricing. If you want to reach out to us at Yoder Real Estate, the best way to do that is to go to our website at yoderrealestate.com, and I’ll come back on in a couple weeks and give you a new update. As we get, enter the spring 2022 real estate market. We look forward to connecting with you real soon. Hopefully this is helpful for you today. Check below for that graph, and we’ll see you real soon.